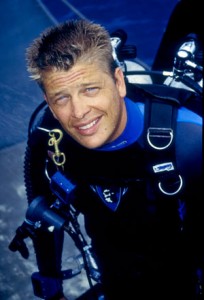 Mitch Skaggs’ industry expertise includes everything from mixed gas and rebreathers to equipment design and video production as well as sales, marketing and consulting.

Mitch Skaggs has devoted his entire life to pursuing the ultimate dive site. He took his first recreational scuba course in 1970 at the early age of 12. In just six short years he would begin a career in commercial diving that lasted over a decade. During that time, the oil boom was at an all time low. So, he quickly found a niche in the fresh water lakes of the Tennessee Valley Authority System where he mastered everything from bridge and dam inspection to vehicle and accident recovery.

It’s the lure of deep water that led him to Florida, where he and his business partner, Tanya Burnett, built H2O Scuba, one of the premier technical diving facilities in the world. From the dive facility, he also ran Seatech, a specialty exploration and recovery operation. He and his deep diving team were contracted by the Department of Environmental Protection to complete the first survey of deep wrecks off the treasure coast, an extensive inventory of ship wrecks ranging in depths over 400 feet salt water. Mitch was also the founding president of the Miami Association of Dive Operators, which worked closely with Astronaut Buzz Aldrin to deploy the first Boeing 727 aircraft as an artificial reef.

Mitch’s high visibility career and expertise in professional diving also helped him land a position with Tom Miranda’s ESPN Outdoor Adventure Magazine, an exciting program geared for today’s fast paced lifestyle. The show’s loyal fan base watched as Mitch and Tom took them on adventures ranging from Caribou hunting in the Brooks Range of Alaska to spearfishing off the coast of Mexico. He began guest-hosting the show with Tom in 1993 and his contract ran through the year 2000.

Currently he and his wife, Angelique, enjoy the view from atop their 15 acre mountain in East Tennessee where he continues the quest for adventure.